I've created the following images over the last several years, basically for fun---they combine two subjects I'm very interested in, software and art. I can't claim these are interesting art, or all that interesting from a graphics programming point-of-view, but I've enjoyed creating these images. These were all programmed from scratch using C or C++. (The only libraries I used, other than math.h or other standard C libraries, were libraries for creating and saving jpg-format images.) 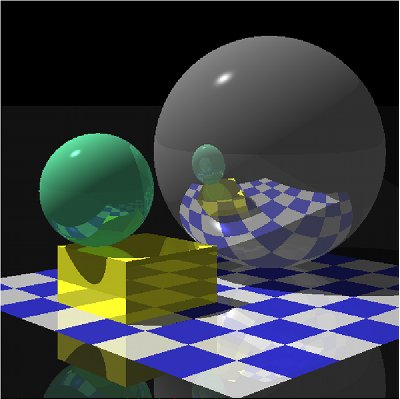 Here is an image that includes implicitly-defined surfaces (surfaces defined by equations) more interesting than spheres. This includes a torus (donut) and the water (a surface defined using a damped cosine function). I should mention that none of these images include refraction of light (nothing is transparent). 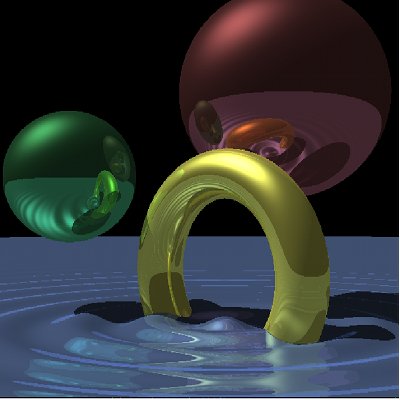 This image shows a rugged landscape. The landscape was built from elevation data I downloaded from a certain USGS site; this is actually a bit of terrain from southeast Washington state, near Mount St. Helens. The terrain is just a triangular mesh; the full data set has millions of triangles in it (we're seeing only a portion here). I discovered using raw triangles gives the landscape an unnatural appearance because the individual triangles were visible, so I implemented a simple averaging scheme to smooth the triangles out. This scene also includes rudimentary texture mapping (the different colored 'strata' on the terrain). 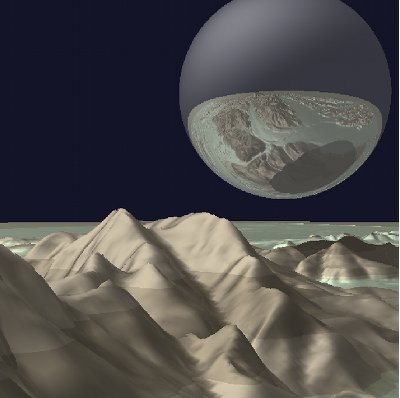 The next image is actually a minor modification of the previous image. I've flattened out the landscape, and I've moved the sphere to the background and changed its reflectivity. I also moved the light source to coincide with the sphere. The intended effect is a desert landscape illuminated by the moon at night. This image was the first image I produced that was meant to be artistic in nature, as opposed to a graphics programming exercise or experiment. 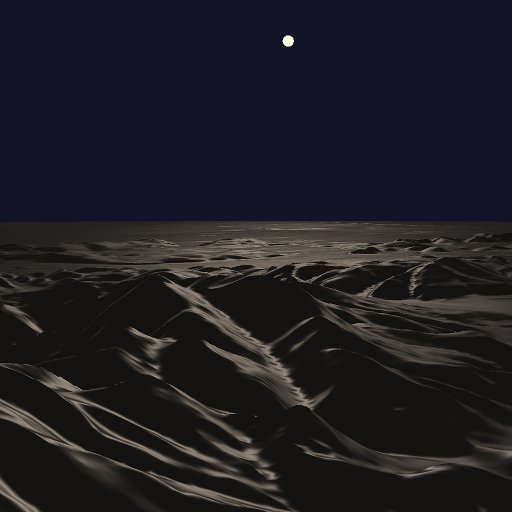 This image is the same elevation dataset but viewed from above. The original dataset was a 1° by 1° square in southeast Washington state, including Mount St. Helens (visible in the lower right corner); this shows the entire 1° by 1° square. The goal here was modest---find Mount St. Helens in the data (something that eluded me in the previous renderings). My intention was to then produce a more dramatic rendering focusing on the volcano itself, but this test image turned out to be rather striking. (I still mean to work on this, but haven't had the time.) I should mention that this rendering includes more than 10 million triangles, but I found a reasonably efficient and simple way of rendering this scene. (The primary difficulty in ray-tracing complex scenes is narrowing down what triangles or other objects a ray of light will intersect. In this scene, I stepped down each ray in small steps, and only looked at triangles directly below each point on the ray as I did so. It was a simple idea but it worked well. One goal of mine is to implement a decent space subdivision scheme to allow me to render much more complex scenes.) 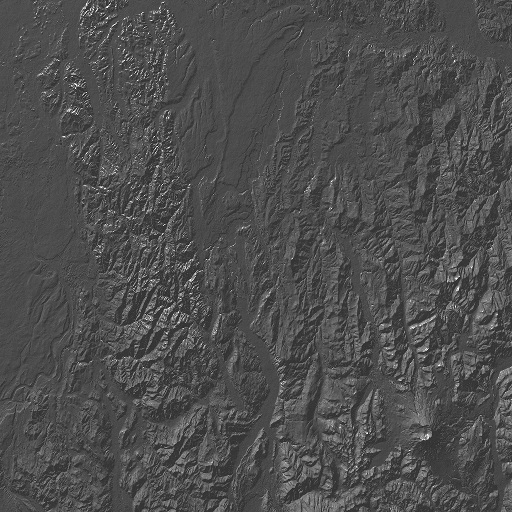 This image represents progress towards implementing a space subdivision scheme to allow rending more complex objects. This shows a Menge sponge rendered three levels deep. The space subdivision scheme is a somewhat rudimentary but functional SEADS (spatially enumerated auxilliary data structure). The sponge is made of 8000 cubes. Each cube is 12 triangles; there were 96,000 triangles total. The program that drew this was about 1500 lines of C code. Render time was several minutes for a 1024 by 1024 pixel image. 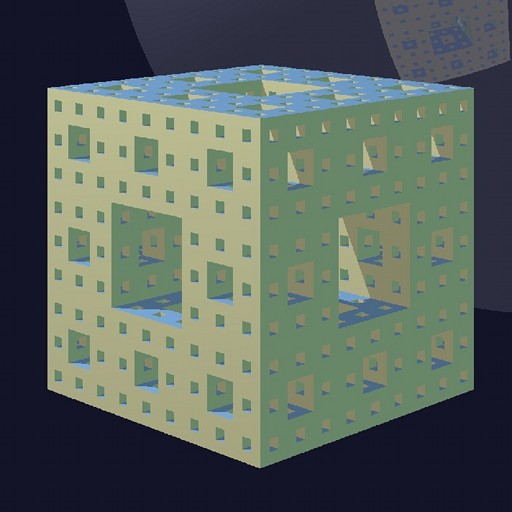